The Orange Army: Max Verstappen on the potential return of the Dutch Grand Prix

The rise of Max Verstappen in F1 has brought with it the rise of the ‘Orange Army’. Across the world grandstands are turning orange as Dutch F1 fans offer their unique brand of boisterous support. 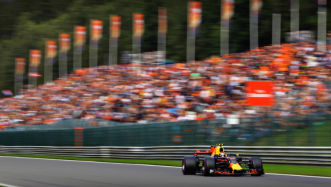 Verstappen’s adopted ‘home’ Grand Prix – the Belgian GP at Spa – became a sea of orange in 2017 as fans of the Red Bull racer took over the historic circuit. Keen to tap into the huge fanbase in the Netherlands, F1 is considering the return of the Dutch Grand Prix to the calendar.

Our friends at Mobil 1 The Grid caught up with Max to discuss the prospect of a return to F1 racing at Zandvoort, boisterous Dutch fans and the positive pressure he enjoys from their fanatical support.