Fernando Alonso’s Australian Grand Prix weekend was bad enough thanks to continuing failings by Honda. But the resurgence of Ferrari  and the performance of Valterri Bottas made things even worse.

The great McLaren Honda project version 2.0 is a disaster. Even with the kind of progress Honda made in 2016 – which was very impressive – the partnership will be well short of their (and Alonso’s) ambitions for 2017: regularly fighting for podium positions.

The resurgence of Ferrari and Bottas’ solid performance in Melbourne have potentially reduced Alonso’s options for 2018.

Before Melbourne (& testing) – stick with McLaren

Based on the progress made by Honda during 2016 Alonso had cause for cautious optimism. Until winter testing in Barcelona the Spaniard could well have been considering extending his contract beyond 2017.

Such thoughts must have vanished in Melbourne. Unless Honda can perform an engineering turnaround of a level never seen before in F1, the double World champion will have no desire to re-sign for McLaren in 2018.

Before Melbourne – join Mercedes alongside Vettel

At the end of 2016 the Vettel/Ferrari partnership was showing signs of serious strain. The German was losing his cool and looking less like the Schumacher-esque saviour for Ferrari. Ferrari in turn were still fumbling strategy calls and  behind the technical curve.

It is an open secret that the board of Daimler-Benz would like their F1 team to feature a German driver again. Vettel – tired of Ferrari – would be the ideal candidate. But what about Lewis Hamilton?

Having secured his fourth World title in 2017, Hamilton would be unable to avoid the lure of Ferrari. Hamilton is a race driver first and music/fashion/style icon second. However he has made no secret of his desire post-F1 to explore his other passions. Combining the Ferrari brand – iconic globally – with his own  – the biggest in F1 – would undoubtedly tempt Hamilton to close out his F1 career in scarlet.

Thus Hamilton moves to Ferrari and Vettel replaces him at Mercedes. With Mercedes now free from concerns about Hamilton/Alonso internal warfare, Alonso slides in alongside the 4-time World champion.

After Melbourne Ferrari look like they can take the fight to Mercedes in 2017. If that is the case, would Vettel want to leave? Unlikely, reducing the chance of a Vettel/Hamilton switch and narrowing Alonso’s options.

Bottas should have blown Felipe Massa away at Williams. Massa  – on the downslope of his career – should have been easy pickings but proved otherwise for the Finn. Consequently many expected Bottas to struggle against Hamilton at Mercedes.

An underwhelming season from Bottas combined with increased competition from Ferrari and Red Bull, could have paved the way for Alonso to join Mercedes. The German team chose harmony over out right performance in pairing Bottas and not Alonso with Hamilton. But that choice might not have been open to them for 2018 if Bottas struggled to beat Ferrari and Red Bull this season. 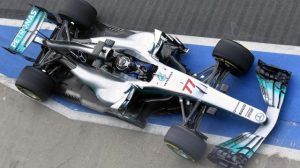 Whilst Bottas struggled to match Hamilton in qualifying his Australian race performance was far stronger. Even closing down his illustrious team mate towards the end of the race. The Finn does not look like being the push over many expected and potentially a stronger option for Mercedes beyond 2017.

A mid-season switch for Alonso?

F1 2017 will be painful for Alonso. Mark Webber reckons his friend will not see out the 2017 season with McLaren. In that vein here is a left-field theory of what might happen.

Alonso departs early in 2017 due to pure frustration as the McLaren Honda partnership disintegrates. Meanwhile at Renault, Jolyon Palmer looks set to be seriously embarrassed by new teammate Nico Hulkenberg.

Having already criticised the team publicly after only one race it is not inconceivable that Palmer’s services could be dispensed with. Opening up an opportunity for super-sub Alonso to join a works F1 team (again). Just putting it out there…

Whatever happens it is bad for F1 that Alonso is stuck with an uncompetitive package. Fingers crossed 2018 sees a change in that situation.