IndyCar has been making positive progress in recent seasons. In particular the championship has been bucking a trend that has seen NASCAR experience a decline in race attendance and viewing figures. In a recent article, IndyCar blogger George Philips proposed that the decline of NASCAR is ultimately bad for IndyCar and all forms of motor sport in the United States.

I agree with George – up to a point. It is true that a general upward trend for motor sport championships is to the benefit of all. More coverage of motor racing reaches more casual fans. With it comes the possibility of converting occasional viewers in to fully paid-up addicts of auto racing.

But underpinning this is the assumption that fans have the free time and disposable income to follow multiple championships. In 2017 that feels like a stretch. Compared to the pre-split days of IndyCar, the ways Americans can spend their downtime has increased significantly. And for many, the dollars have been squeezed.

In the sphere of sport alone there is more choice than ever. The reach offered by online streaming for example has allowed sports with previously limited exposure to achieve more. The big boys remain – NFL, NBA, NASCAR – but around them a whole host of new players have entered the marketplace.

Whilst each sport is unique they are all ultimately the same product: a way to spend your leisure time and income. With more options comes more choice but the time available to spend on leisure activities remains the same (or these days  is perhaps reducing). 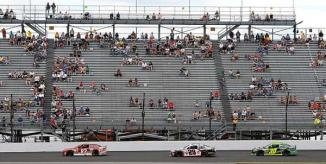 Choice is making it hard for any individual sport – particularly one as damaged by past mistakes as IndyCar – to co-exist with rival products. A buoyant and growing NASCAR in the USA is damaging for similar products like IndyCar. Because not everyone can afford to or wants to follow IndyCar along with NASCAR, NFL, NBA, their local college football team and whatever else they are in to. Following a sport properly takes time and money.

NASCAR wants to finish first. So does IndyCar

Aside from the intense competition for eyeballs and butts on seats, there is another fundamental issue preventing preventing IndyCar and NASCAR from happily co-existing. The simple fact they both seek the same outcome: growth.

Both crave growth because both are businesses. They are there to make money, not to race for the sake of it. As ChampCar demonstrated, there is only so long a series can continue if it cannot make any money.

To envisage a time when both NASCAR and IndyCar are  booming and happy what they have in terms of sponsors, coverage and fans is unrealistic. Both will always want and need more. And this is especially the case for NASCAR after the spectacular growth it has enjoyed since the late 1990s. Going back to being in the shadow of IndyCar is no longer an option.

An uneasy truce between NASCAR and IndyCar

There is a peaceful if limited co-existence of the two championships. IndyCar runs on some NASCAR-owned tracks, NASCAR runs at the Brickyard and a couple of team owners participate in both championships. For now IndyCar is not a threat to NASCAR, even with the latter’s recent decline. However that does not mean it will never be.

The 2017 NASCAR championship format changes have been specifically designed to arrest the decline in attendances/ viewing figures. If they are not successful and simultaneously IndyCar continues to make gains, NASCAR will take notice. Should that trend continue for a couple of seasons, NASCAR will not simply sit back and accept that the strength of another racing series is ultimately good for them.