The first F1 pre-season test of 2017 in Barcelona gave us a chance to see the new era of F1. Wider cars, more aerodynamics and giant tyres saw lap times tumble in Spain. So what did we learn ahead of the 2017 F1 season?

Make no mistake, the regulation changes for 2017 have not (yet) toppled Mercedes AMG from their top spot in F1. Barring some minor glitches the Mercedes cars of Lewis Hamilton and Valterri Bottas ran long and fast.

Over the course of the test Mercedes racked up a mammoth 558 laps. Trading top spot on the time sheets with Ferrari on all tyre compounds suggested Ferrari have closed the gap to the Silver Arrows.

Ominously on the final day in Barcelona credible sources suggested Mercedes had yet to run their power unit at 100%. Expect the second Barcelona test on 10 March to offer a clearer indication of how good the new Mercedes W08 really is. And how far behind the competition remain.

The first Barcelona test was extremely positive for Ferrari. Sebastien Vettel and Kimi Raikkonen racked up 468 laps between them and topped the time sheets regularly. A much smoother pre-season test than Ferrari have experienced in the past, it raised expectations that the Scuderia can finally challenge Mercedes in the hybrid-era.

Ferrari however have a habit of over-performing in pre-season tests only to disappoint in Melbourne. The pressure from the Italian media has often forced Ferrari to seek headline-grabbing testing times. When Mercedes – as expected – turn up the power on their hybrid power-unit next week we will get a clearer picture of how close Ferrari really are.

Of the current top 3 teams in F1 Red Bull had the toughest test in Barcelona. Issues with their Tag Heuer-branded Renault power unit limited Daniel Ricciardo and Max Verstappen to 294 laps. Red Bull were slower than Mercedes and Ferrari and maintained their position that they are not expecting to be able to match Mercedes until mid-season. 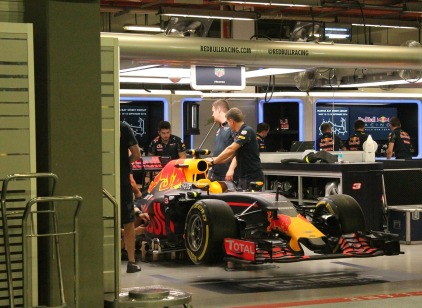 One thing that was clear from this first test is that the Renault power unit remains under power relative to both Ferrari and Mercedes. The slippery RB13 design has clearly been created to minimise drag in expectation of the Renault power unit remaining under powered. Whilst the new 2017 F1 regulations have attempted to increase the importance of aerodynamics they have not fully addressed the dominance of the power unit. Until Renault make further gains – expected during the season – Red Bull are unlikely to seriously challenge Mercedes in 2017.

Thanks to a few spins from Lance Stroll, Williams’ first pre-season test was a disappointing one. No afternoon session on day 3 and no running at all on day 4 were the  result of chassis damage caused by Stroll’s final accident.

Day 1 results with un-retired Felipe Massa suggested Williams have a solid car and will benefit from the improved Mercedes hybrid power unit. The limited running on days 2 – 4 mean it is difficult to assess where Williams sit coming in to the 2017 F1 season.

There was a serious feeling of deja vu for McLaren in Barcelona. Problems with the completely re-designed Honda hybrid engine emerged from the outset of testing. The team subsequently replaced four power units over the course of the four day test in Barcelona.

Keep in mind that the tighter power unit regulations in 2017 mean teams are limited to four engines this season. Reliability aside the McLaren-Honda package appeared also to be slow but it can be assumed the team were not running their power units at full capacity. Oil tank issues and power unit failures prevented any significant running.

Rumours swirled in the Barcelona paddock suggesting the new Honda engine is also less powerful than the 2016 version. Both Honda and McLaren were on the defensive about the survival of their partnership. Without significant improvements in the final test it appears that the gains made in 2016 have been lost. Much of the blame can be laid at Honda’s decision to completely re-design their engine to mimic the benchmark Mercedes hybrid. A brave move to try and close the significant gap to Mercedes however for now it appears to have backfired.

The second and final F1 2017 pre-season test in Barcelona starts on 7 March.