Ford Performance director Dave Pericak recently rubbished rumors that Ford is considering becoming the third engine supplier to IndyCar. Pericak questioned the relevance of IndyCar to Ford’s ‘track to road’ policy in an interview with Autosport.

“We don’t want to go out there just to race. If there’s not a direct translation to the cars, then we’re not going to spend the money, time and effort. We truly are using racing as a testbed.” – Dave Pericak, Ford Performance director

The interview left me wondering this: are Ford’s current race programmes really that relevant in the ‘track to road’ philosophy? And where does IndyCar fit within a programme that aims for only ‘track to road’ applicability?

Win on Sunday, sell on Monday

The relevance of motor sport to road cars has always been a dubious justification for racing. In Ford’s case it’s activities in NASCAR, WRC and World RX provide a visual and brand link to their road car range. Beyond this the extent to which there is a direct technical and engineering link varies.

Taking the NASCAR Ford Fusion as an example, the contrasts between the road and racing versions are stark:

We can also throw in to the mix the NASCAR-mandated body templates, custom made engine blocks and heads and the use of slick tires to further reduce the links between track and road.

How relevant is NASCAR to the road?

Which begs the question: how relevant from an engineering standpoint is NASCAR to Ford’s road going Fusion range? To quote Pericak, where is the ‘direct translation to the cars’? Aside from the visual and branding elements, very little it would appear.

Engineering prowess is definitely challenged in NASCAR. The series regulations focus on performance parity amongst manufacturers. Meaning engineering  limits have to be pushed . But the scope to transfer learnings from track to road is limited.

What can enhancing the performance of a stock block normally aspirated engine do to advance smaller capacity turbo versions used in Ford’s road models? What can be learned from racing an antiquated manual transmission in the context of automatic gearboxes? And what is the knowledge transfer from track to road for Ford when specialist engine and gearbox builders like Roush and Xtrac do most of the work?

The Fiesta WRC model is directly derived from the road going version. WRC homologation rules require a manufacturer to produce a sample of road going cars of the rally specification. From a pure engineering perspective the similarities between road and rally versions are much more extensive including the 1.6 liter turbocharged engine, MacPherson strut suspension and six-speed gearbox.

Similarly the Focus model raced by Ken Block in WRX shares a direct relevance with the Focus RS road version. Arguably the WRX Focus is the most relevant racing model for Ford. With all wheel drive, turbocharged engine, and massive aerodynamic package the activities in WRX have influenced the new 2017 Focus RS which Ken Block directly consulted on.

The track as a test bed for Ford

The ‘track as a test bed’ philosophy applies to elements of Ford’s current motor sport activities, but certainly not all of them. One thing is common however: the engineering challenge. In that regard it is hard to reconcile Pericak’s comments that IndyCar does not offer a valuable platform. 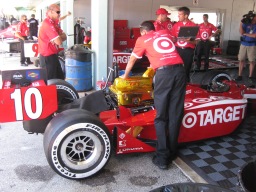 Even in their current form IndyCar engine regulations offer road car relevance. Using Ford’s US range again, the engineering inherent to the 2.2 liter turbo Indy engine spec is relevant to their Focus, Fusion, C-Max and Taurus models. Certainly far more so than the 5.9 liter NASCAR V8.

Secondly, IndyCar is willing to work with a third engine supplier (alongside Honda and Chevrolet) to guide the next generation regulations from 2019. This includes consideration of lower capacity (1-1.5 liter) turbo engines which would add further relevance to the series in terms of road technology.

The real reason behind Ford’s disinterest in IndyCar

To dismiss IndyCar purely on the basis of relevance (or otherwise) to road production is, I believe, disingenuous. I would content Ford’s perspective is based on two non-engineering issues.

Firstly that IndyCar is not (yet) the marketing tool it once was for manufacturers. Secondly that Honda and Chevrolet have too much of an advantage under the current engine regulations for a third party to be able to compete. Especially given that the regulations will change for 2019.

The former is arguably of the greatest significance. Once the marketability of IndyCar in terms of viewing figures and spectator attendance is death with, and a new engine formula is devised, IndyCar will find it much easier to attract a third engine supplier.

As far as Ford are concerned, if they want to discount IndyCar that is their prerogative. But at least be honest about why.