Mark Miles is talking about expansion. In Florida for the season-opener – a few weeks after the 2015 season should have started in Brazil – the IndyCar boss was laying out another vision for overseas expansion. This time it’s by becoming an alternative to F1.

Miles’ logic is sound in principle: IndyCar can provide a ready-made, (more) entertaining open wheel product to those circuits unable to pay/fed up paying Bernie Ecclestone the exorbitant F1 sanctioning fees. Combined with the ever increasing demands for circuit infrastructure improvements, it can be assumed that circuits might be looking for a cheaper alternative.

But it is right to characterise IndyCar as ‘F1-lite’? As current fans, many of whom have stuck by IndyCar through thick and a lot of thin, do we even want the series to move in that direction? Considering the motives behind the decision of a circuit or government to host an F1 race can help answers those questions.

Is it on the box?

Irrespective of country fluctuations, F1 enjoys global TV audiences. That coverage has made Lewis Hamilton and Fernando Alonso world-famous. It is why manufacturers invest millions and why the biggest brands will pay top dollar for sponsorship rights.

IndyCar by comparison is not even playing in the same league. Without that coverage, a circuit outside of the Americas will struggle to find enough paying spectators who a) know about the series and b) want to see it live, to make the race financially viable. Similarly, the state or regional governments that might need to back the circuit in a switch from F1 to IndyCar want TV coverage to put them on the world-map and highlight their sporting and business ambitions.

IndyCar sanctioning fees would be considerably smaller than their F1 equivalents but that does not guarantee a commercially viable product. Circuits in IndyCar’s US ‘back-yard’ continue to struggle to sell out on race day, so how would an overseas circuit fare any better? A circuit like Germany’s Hockenheim (recently stripped of its F1 race) would still carry the burden of transportation costs, albeit it much smaller, for an IndyCar event thus ramping up the pressure on ticket sales further. 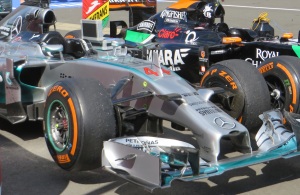 IndyCar cannot replace the phenomenon of F1. It does not bring with it global brands like Ferrari, Red Bull, Mercedes, Rolex, Johnnie Walker, SAP and the like. The Hollywood stars that grace the Monaco Grand Prix weekend do not come because the racing is good – they come to be seen and to be there because it is Formula 1.

That cavalcade of stars and brands and business has been a major reason for countries like Malaysia, China and Russia pushing for an F1 slot. Can IndyCar offer that? Not on the same scale and not in the same spheres.

A look up and down the IndyCar grid and you will only find a handful of businesses and brands that operate outside of the Americas. The drivers are not the mega-stars of F1 and the entourages that appear at Long Beach and Iowa Speedway do not come with swarms of paparazzi in tow. And is that even IndyCar at its heart? One of the best aspects of IndyCar is the fact you do not need to pay thousands of dollars per ticket for the chance to be close to the behind-the-scenes action.

And at any rate, there is one major stumbling block Miles seems to be choosing to ignore: Bernie Ecclestone.

When Nigel Mansell’s move to IndyCar in 1993 turned on a whole new generation and international audiences to the series, there were rumours. Rumours that Bernie was concerned.

‘Experts’ and commentators were predicting that the superior blend of racing, circuit types and show (because the Americans do that better than Europeans) could see IndyCar become a direct rival to F1. There could even be cross-code championships or worse, an eventual usurping of F1. For those only familiar with IndyCar since the 1995 split this may seem utterly ludicrous but it generated thousands of very respected column inches at the time.

If the rumours were to be believed Bernie nipped this in the bud quickly. He allegedly played a critical role in getting Mansell back to F1 following Senna’s death. Whether true or not, the fanfare that sprung up so quickly around the World Champion’s arrival died almost as quickly when he dumped Newman-Haas for Williams.

Was IndyCar ever to reach a positon of trying to be the alternative to F1 (and even looking like possibly succeeding) Bernie would stop it. His perspective is that circuits that miss out on F1 have to fight to get back in, not side with someone else and ride in to the sunset, content with their F1-lite alternative. Otherwise, the bidding war that ensues for a slot on the F1 calendar cannot perpetually drive up Bernie’s sanctioning fees.

Indycar needs to focus on North and South America and get itself to a position of strength there. Until it becomes a more permanent viewing appointment in the homes of Americans and rounds are regularly near capacity on race day, the idea of overseas expansion should be parked.